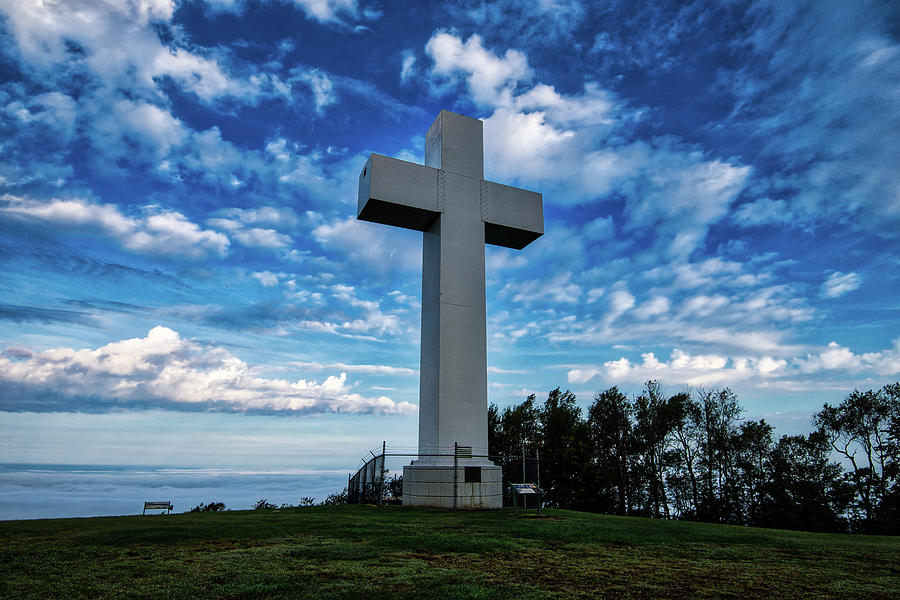 Walk to The Cross

Guests are welcome to walk up to the cross. There is a paved walking path and benches. The road is not open to driving traffic.

Please park at the parking lot at the base of the hill.

A stranger driving through the highlands of Southwestern Pennsylvania, saw something on a far-off mountain top that looked like a gleaming cross. Stopping his car, he trained field glasses on the object and said, “That looks like one of the wonders of the modern world. It must be one of the biggest crosses ever erected.” And indeed it is. Since 1950 a steel cross 60 feet high has stood on a concrete base six feet tall on Dunbar’s Knob, which itself is 2,480 feet above sea level. On a clear day the mountaintop boasts a view of three states and seven counties with sights up to 50 miles away. At night it is bathed in glowing spotlights, shining as a beacon of hope and inspiration to all who see it far above the dark silhouette of the Appalachian Mountains.

The story behind the massive cross is an inspiring one, too. The money to build it was collected in hundreds of Methodist Churches before World War II; then the wartime steel shortage forced postponement of the project. When it was taken up again, after the war, its fabrication and erection posed many problems. Credit for the solution of many of them, as well as contributions to the cost of the project, must go to L.C. Steiner of the Latrobe Foundry and Machine Company, Latrobe, Pa.

A foundation consisting of 183 tons of concrete had to be onstructed. Then, the main shaft of the cross, weighing approximately 47,000 pounds, had to be hauled to the mountaintop site, after cutting a road up the back side of the mountain. The cross arms, projecting 12 feet on each side of the main shaft, were brought in separately and the entire structure was securely welded together.

Because of its exposed location, the bracing of the structure had to be thorough, but all bracing is inside the clean cut steel surface of the cross. The completed structure will withstand winds of 100 miles an hour and the torsion that might be developed by a whirlwind. The surface is steel plate, almost half an inch thick, rolled in US Steel plants in the district. It was originally coated with a substance called Gilsonite with white mica embedded in it.

So on the birthplace of a great war, stands a great monument to the Prince of Peace. It was erected on August 26, 1950, and the Dedication services were held September 9, 1950.

We would love to connect with you! Call/Email/Friend Us!